How do I know if its' really the screen that is hosed?

So, I did a thing... I replaced the battery in my iPad Pro 9.7" a month ago, but upon setting the screen in place with the adhesive and testing to make sure it worked, I got weird banding of colored lines and a white halo around the edge of the screen (see attached image). I had to use a heat gun to remove the screen, and I had to heat it several times just to get the adhesive soft enough to work a spudger under the screen's edge- so I think I fried the screen. I also noticed that the back of the device got real warm while I was testing it, so I used the sleep button to power it down right away. I was so mad at myself, thinking I had botched this repair, that I set it aside in frustration.

Today I turned it on again while trying to decide what to do about it. I had to plug it in to test it, and the screen kept turning on and off, while displaying little colored lines across the screen (see image again). I'm still thinking that the screen is fried (and the battery now needs to be charged as well), but could there be more to this screen issue? I don't want to invest in a new screen repair only to find out that there are other issues than just the screen. Any insight from y'all would be very helpful. This is my personal device, and it was in immaculate condition inside and out (save for the battery which needed replacement), until I did this repair. To be fair- I have done scores of repairs with iFixit's tools and replacement parts before (including one or two other iPads), but this is the first time I've not had a completely successful repair. HELP! 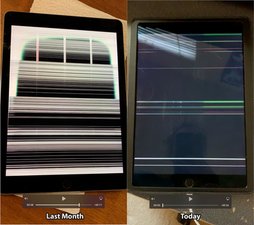 I'd check the screen connector and cable just on the off chance before buying another screen, but if you got it too hot you may have killed the digitizer anyway. Otherwise @tech_ni is likely right.

new screen and it will be fine