I just picked up this Samsung UN65MU6290 / PS board # BN44-00873C with no back light but otherwise fully functional (passed the flashlight test). My initial assumption was the LED strips were bad but upon further research apparently the Power Supply board can also be at fault for "over driving" the LED strips. On ShopJimmy they are recommending to replace some resistors and other components (transistors?) in conjunction with the LED strips (although their referenced Youtube link only demonstrates replacing the resistors):

"--PLEASE NOTE: This repair is recommended only for experienced technicians. After installing these LED bars, we strongly encourage you to perform the modification on the power supply board in your TV (BN44-00873C) that can be seen here: https://youtu.be/R_KuCkW1SO4

Replace resistors R9111 & R9211 as shown in the video with the included resistors from ShopJimmy.

After this modification is done, the LED bars will run much cooler than the stock ones and will prolong their lifespan significantly."

What has me especially paranoid is a comment I read from an eBay listing:

I need help approaching this cautiously and logically. I don’t want to unnecessarily buy LED strips if I don’t need them and I also don’t want to buy new ones and then fry them because of a fault in the PS board. I greatly appreciate any help diagnosing this. Tagging the experts who so generously help me time and time again.

I will post pictures of the board and LED circuit momentarily. I had no luck powering the LED strips from the harness but maybe I wasn’t doing it right. The harness seems to split into 2 sets of 4 wires. Each set contains a black wire with a grey stripe (ground?)

Photos of power supply board : 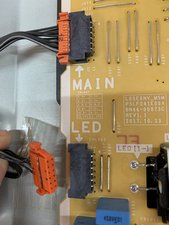 CNL802 is the connector/plug for the LED and I can’t make sense of the listed voltages in the diagram. I get about 317 volts on terminals 1, 2, 3 and 4. Terminals 5 and 6 which I believe are supposed to be ground I do not get a continuity reading. Terminal 7 I get minimal voltage: 0.12V and Terminal 8 : 0.02V. The readings are the same whether the harness is plugged in or not. 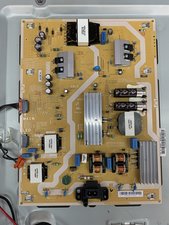 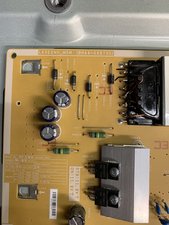 Hey guys. Sorry for the slow reply, I didn’t mean to ghost on this thread but I ultimately decided to go ahead and disassemble the TV to inspect the LED strips. They were trashed, totally burnt up. So I got a new set of LEDs from China and it took this long to receive them.

I installed the new LEDs which was kind of tricky, I somehow chipped off the edge of one of the LEDs but it still seemed to light up. Frustrating, but I continued with reassembly. I’m waiting on my repair kit from Shop Jimmy but have been deliberating about how many of the components I am even skilled enough to replace. I think the resistors should be simple enough but it looks like the kit includes a transistor and some other component/chip. I have no idea if I can / should attempt to replace these or what the impact of leaving them out may be. 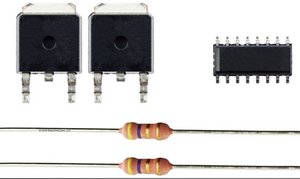 Yesterday I became impatient and decided to power on the TV now that I have the new LEDs installed. I knew it was a risk but I’m already skeptical about the condition of the LEDs I reinstalled and if anything goes wrong with my PS board mods I would be left wondering if any issues were related to that or the LEDs. So upon plugging in the TV the backlight/LEDs came on right away and there was a buzzing noise, the backlight dimmed and I immediately unplugged the power cable. This was all within 1 second or less. I thought at this point I might’ve fried the LEDs again but was able to use my LED tester to power them on through the harness.

At this point I’m just waiting on the repair kit to come in the mail and I’ll go from there.

I received my repair kit and replaced the resistors at R9111 and R9211. I plugged everything back in and the LEDs are now flickering and the PS board is buzzing in sync. According to ShopJimmy this is a PS problem and their kit should fix it. There are no instructions to help me understand the intended location for these pieces or their function. Will report back with further progress.

(3v per x ?, this is roughly what you should be reading from the power supply after powered on and steady with load. will be higher with no load.)

to test if there is overcurrent, set your meter to the min/max setting so it will hold the max voltage read. set up your leads to take the reading so it will record the voltage when the set first applies the current to the leds. it should not read higher that the max output listed on your power supply.

upload a pic of the back of your power supply. id like to see the traces leading to the if1 and if2. 9 times out of 10, these weird pins arent even hooked up in circuit (no current flow to the pins)

as far as the modification they are recommending, this is common practice in the field with known devices that just push too much current. increasing the size of the resistor from lets say 100k ohm to 110k ohm will allow the longevity of the leds by off setting some of that heat caused by an underrated resistor for the circuit. these guys are good at mods and i would go ahead and just install whatever kit they give you.

as far as the leds go, business as usual. apply your manual dc current and test the bulbs, series, strip individually…how ever you wanna do it and your tools can handle. if they check out then you know it not them at least and can take them out of the equation.

test your leds, test your start up voltage from your power supply with and without a load and match it against the output listed on the legend and what the logic is for how many leds they are powering at a time per line.

let me know where you end up.

The 317V DC is the power board pushing out the maximum voltage it can trying to turn on the LEDs.

If they're not on it means an open circuit between the power board and or in the LED array.

As @jostewcrew said, they're wired in series so one faulty LED can affect a whole strip. Check all the LEDs individually to make sure that each one is OK.

Once you consider that all the strips are OK etc, then modify the power board as recommended.

This should answer most of your questions. https://www.youtube.com/watch?v=ejaRVrnD...