Hi! I just bought this display on eBay, and unfortunately, I found that its USB ports do not work. And as such, I can’t change the brightness (which sucks, because the person who last used it turned the brightness way down). I’ve plugged in the USB cable with the display, but again, I don’t believe it works.

I also have a 24” LED Cinema display, and that one works perfectly fine. An odd behavior of the ports is that as soon as I put my iMac to sleep, the ports start “working” - they don’t transmit data (or at least, I don’t think so), but they do charge my iPhone, so they are capable of power transmission. But as soon as I wake the iMac up, poof! It stops charging. The USB cable does look slightly beat up, but I don’t think that’s the problem, and would like to try every other available option before needing to replace that, as even though it’s doable, it’s a serious PITA!

So, is there any way to change the brightness, without using the built in USB cable? Or, is there any way to reset the display to its original factory settings (as I have a feeling the factory brightness is somewhat better than what I have now. I don’t care about changing it at all once it’s brighter - I just need it to not be this dim!).

Unfortunately, I don’t think installing any apps will work for my case, as they don’t permanently change the brightness (at least, I would assume), and my end goal is to use this display with my PC (which works just fine, but again, the brightness…). Thanks for the help!

Ok - I’ve fixed my issue. And I’ll tell my entire process, just in case anyone else happen to run into these same symptoms. Make sure that before you try what I’ve done, you’ve attempted every software-based reset and firmware update that you possibly can, because fixing your problems with a PRAM reset is probably easier than disassembling a display.

I started by taking the glass display cover & the display panel off of the monitor. The connector plugged in to the motherboard of the display that had the USB port on the other end is simply a standard USB Mini (male) connector. I took my multimeter, and using the continuity testing mode along with a USB Mini to USB A pinout diagram, I tested all four of the USB A’s pins’ continuities, and lo-and-behold, the Data+ pin failed the test. Before making any crazy jumps from there, I luckily had a 100% functional LED Cinema HD Display (24”) available. From other forums, I’ve discovered that the two do in fact share the same connector cable, although the model number is different (NOTE: THIS IS A DIFFERENT CABLE THAN THAT OF THE THUNDERBOLT DISPLAYS, SUCH AS A1407!). The compatible model numbers are 922-9362 (27” A1316 display cable), and 922-8679 (24” A1267 display cable).

So, I disassembled the 24” display, which had the same USB Mini connector. I used my multimeter to again test continuity, basically making sure that Apple didn’t pull some proprietary weird thing and wire the connector differently than standard. Luckily, it appears that they did not do that! It shares a standard pinout. 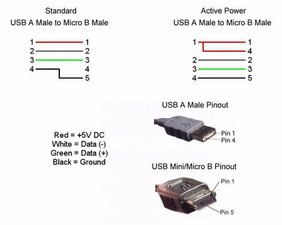 Here’s where things get wonky (this is just mostly due to my own laziness). I did not want to buy a new cable ($100 - no way! I just spent nearly $300 on a 10 year old display!), and personally, my only issue was with the display’s brightness being super low (USB hub, shmUSB hub. Pffft!). So, I took the USB Mini cable from inside the 24” display, and connected it into the connector on the 27” display’s motherboard. Plugged the USB of that cable into my iMac, along with the MiniDP of the 27” display (leaving its actual display panel & internal connectors all still connected). Turned on the iMac, changed the brightness to a better one, and then unplugged everything and put the two monitors both back together.

⚠YOU CAN GET SHOCKED IF THE DISPLAY IS ON AND/OR PLUGGED IN WHILE YOU ARE WORKING ON IT. ABSOLUTELY DO NOT DO WHAT I DID, UNLESS YOU 100% KNOW EXACTLY WHAT YOU ARE DOING AND TOUCHING⚠

Your experience may differ (hopefully), but long story short, if you have this same problem, it is caused by a faulty display cable - one of the USB cable’s wires (in my case, at least) likely got severed somewhere throughout the length of the cable. Fixing is kind of a pain, as most of the display needs to come apart, but is certainly doable.

If you have this problem & the same symptoms as myself, good luck fixing it - I hope it goes well for you!