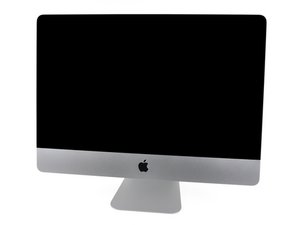 Screen Glitching and not responding to Mouse Movement/Keyboard

My 2008 or 2009 iMac takes around 2+ minutes to start displaying the Folder ? Icon. It has weird pixel glitches around the symbol.

Startup + ALT takes me to the Screen where I can choose the Boot Volume but I can't move the mouse there and the Keyboard isn't responding. Also this screen is glitcched up.

Does anyone know about this problem and/or can help me with it?

You do need to use the keyboards arrow keys to move your choice up & down. The mouse won't work yet as the boot up process hasn't gone far enough for the driver to load.

@danj picture is up

When you first boot up your system the built-in graphics engine within the CPU is used. As it doesn’t have any RAM it will leverage your systems RAM for video RAM.

These glitches in your picture is either the RAM you have installed has issues, or the CPU’s graphics engine has problems.

But we still have the blinking ? In the folder issue which gets into the systems drive is not being seen. Let’s restart your system and press the Option key to enter into the Startup Manager and then use the arrow keys to select your boot drive. Did the system properly start up? If it did that would imply the PRAM battery has died.

If you can’t get your system started at this point the drive or the OS on it is not working. You’ll likely will need a new drive.

So after testing your system with another set of RAM did the artifacts disappear? If not that may imply the CPU is in trouble so now you have to decide if replacing it or the logic board and the drive is economical Vs getting another system new or used.