Why can't I boot past a vertical striped screen?

I've got an A1226/A1260 MacBook Pro. (I'm not sure which; the label has faded.) Maybe 18 months ago I dropped it on its corner and the display cracked. It was a small crack that wasn't extremely distracting, so I didn't fix it. (Apple was going to charge $1300 to fix it.)

About 6 months ago the display went out. When I tried to boot it, the display showed vertical light green and grey stripes on both sides of the display and dark green and black vertical stripes in the centre. So I decided it's time to replace my display.

I replaced the LCD screen which unfortunately is a Chi Mei display. I also replaced the hard drive because I wanted a larger hard drive. There are no problems with it. So currently it has a new 750 GB HDD (unformatted) and a new Chi Mei display, all installed correctly, but I still get the same error.

I can't load past that screen to the HDD, to the CD drive, or to the firmware. (Using Command-Alt-O-F). I have reset the PRAM, I believe (Command-Alt-P-R). Can't think of anything else to do at the moment. Is there another part I should replace?

Likely irrelevant: The old HDD is currently in a cheap MacBook and works fine, although it is 100% full.

Possibly relevant: I tried booting to the CD but couldn't. I was able to eject the CD by holding down the left mouse key during bootup.

Likely relevant: It powers on and off nearly instantly when pressing the power button. It does not require me to hold it down. It also sounds the startup chime regardless of the method of startup (CD, HDD, or Firmware). I haven't tried target mode, as there's nothing on the HDD. I have an iMac G5, a 2009 MBP, an Intel Core Duo MB, and an HP Touchscreen desktop (iMac style); so I don't know if there's anything I can use as an external display. 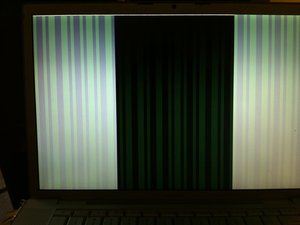 It is the NVIDIA issue. I took it to an Apple Store instead of buying the cable, since that was free. They diagnosed it as such and are repairing it for free, as well as formatting and installing the OS on the HDD for free. If it's not fixed when it gets back, I'll update with more info.

First find out which machine you have. Remove the battery and look at the sticker on the bottom of the keyboard which will tell you or give us the last three figures of your serial number (found in the same place) and we'll tell you which machine you have and which GPU. Usually I try to fix just one problem at a time so that if something fails to work, you have an idea of where to look. First put the hard drive in any one of your other machine except the one that the old hard drive is in. Set it up in Target Mode: http://support.apple.com/kb/ht1661 Use Disk utility to format the drive. Then download and use SuperDuper to clone the old drive to the new. http://www.shirt-pocket.com/SuperDuper/S...

Now put the drive in your machine, see what happens and we'll see if anything can be done for the remaining problem.

Last 3 of the serial are YJK.

The only problem I don't know what to do about is the booting. I know how to take care of the hard drive. I should be able to boot to a CD or the Firmware even if there were no hard drive in the computer at all. (I have before with another MacBook.)

So, you have my serial, should be able to help identify if it's a 1226 or 1260... Don't know what to do beyond that regarding the display though.

100% confident it's a MacBook Pro. I've had two of them. I'm fairly confident it's either A1226 or A1260. I've completely disassembled it a number of times using that walkthrough on here. The MacBook is quite different than the MacBook Pro on the inside. It is a Core 2 Duo though, but it's a 15", not a 13". And it's aluminum, not white.

If this is the wrong machine then check the letters you gave me, or the top case has been exchanged giving a new serial number.

Sorry, I thought I posted the full number in the last comment. The full serial is W88084LGYJX. (I typed K instead of X last time; sorry.) Everything's factory fresh, purchased directly from Apple, except the Hard Drive, RAM, and Screen. (Factory fresh 3.5 years old though!)

Buy a LVDS cable first, change that out and report back with the results

If that fails, the screen may be bad, this time, find a quality screen that fits(I had that screen in a diffrent laptop, it came out after it started failing, those screens have a bad history with me nor will I EVER recommend these screens)

If the screen still fights, it may just be the NVIDIA issue, mayer, please note I eliminated many variants to get this far

I didn't go blame NVIDIA this time, I went ahead and eliminated variables before I referenced it

Mayer, good point, I should know better to reference that more being I have 2 screens, a SONY trinitron CRT I rescued off the side of the road for benchtesting and troubleshooting and a LCD i use with my Unibody, we all make mistakes at some point

You didn't see a down vote did you? Unlike some others who will remain nameless, you readily accept constructive criticism in the spirit in which it is given. You must have very loving parents.

And that criticism actually helps me improve my awnsers, just like a aspiring comedian would watch Kat Williams or David Chapelle for reference purposes, not steal his jokes