Repair guides and support for your Samsung TV.

Samsung HL61A750A1FXZA Not Powering On and Power Cycling

I have a Samsung HL61A750A1FXZA Not Powering On and Power Cycling with a Green LED flashing on the “LED” LED until finally after the last power cycle a “Standby/Temp” RED LED and the other two “Timer” and “LED” are GREEN LED’s as observed at about 1:47 into the below video.

I found the Blue LED was bad and replaced that with the Blue LED from another Samsung (HLT6187SAX/XAA) with white dots and dots fading to white throughout the display screen indicating a bad DLP sensor. Here is a reference for those that may need to purchase a Blue LED: https://www.shopjimmy.com/samsung-bp07-0...

Here is a reference regarding changing the LED’s: https://www.youtube.com/watch?v=xHE1knzJ...

Originally, I was going to just replace the DLP chip in the HLT6187SAX/XAA with the DLP chip in the HL61A750A1FXZA. Figured I’d do module or easy component swaps that might save time to see if any difference in performance and to eliminate the power supply as the cause in the HL61A750A1FXZA since looked worse with bulging leaking capacitors. Even with the bulging leaking capacitors… both boards appear to function the same.

Figured I’d ask also to see if I can repair the HL61A750A1FXZA module(s) issue and save having to swap DLP chips.

Finally, to get back to the question:

Why is the Samsung HL61A750A1FXZA Not Powering On and Power Cycling with a Green LED flashing on the Standby LED until finally after the last power cycle a RED LED and the other two are GREEN LED’s as observed in the video I made?

FYI…, I don’t think I have a remote control for either of these two TV’s so I am not sure how to enter the service mode.

I figured I’d check to see how the HLT6187SAX/XAA modules were still performing with the bad Blue LED thinking I’d have white dots and no Blue… well… that didn’t help I’m thinking and may have made the situation worse. Then I swapped the good Blue LED back into the HLT6187SAX/XAA engine optical train. Now when using that systems modules I am not getting the white dots relating to the DLP chip issue… I’m getting that same issue as this question is regarding with the HL61A750A1FXZA other than I have a Red “Standby” LED when I plug in the wall outlet cable, I have to power on the TV and then the same issues occur with the Green “LED” blinking LED. My guess is something with the LED or main power supply board. 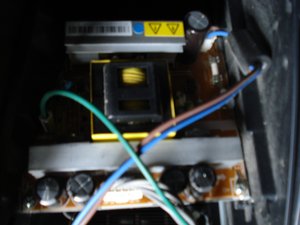 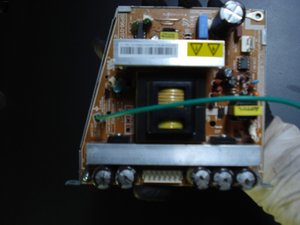 @jafinch78 what exactly is your question here? I am old so maybe just to dense to read between the lines. BTW this "Even with the bulging leaking capacitors" is never a good thing and rest assured that if they are bulging you are having issues somewhere......

@oldturkey03 Basically, why is the Samsung HL61A750A1FXZA Not Powering On and Power Cycling with a Green “LED” LED until finally after the last power cycle a “Standby/Temp” RED LED and the other two “Timer” and “LED” are GREEN LED’s as observed at about 1:47 into the below video?

I tend to be a To Much Information (TMI) kind of guy and can sometimes write like I used to give speeches with an introduction, ad nauseum body and finally a conclusion.

I probably can refine the question also to be more clear as I'm noticing I wasn't as clear as can be. A little to much background info I'm thinking didn't help either regarding the situation.

@jafinch78 It's all good and there is never really to much information. Just takes me longer to process it ;->

@jafinch78 it is really hard to identify but it appears as if all your caps on your power supply have bulged. Before any further troubleshooting, you will have to replace those first. Of course could just be that my presbyopia or the fuzzy images are just getting the best of me ;->

I don't have any presbyopia but my eyes just see the same bulging :)

@oldturkey03 @arbaman Yes, they are definitely bulging. Planning to make a Mouser order tomorrow. Thinking might not be a bad idea to order low impedance/ESR caps also. What are your thoughts regarding the better quality capacitors or since a power supply low impedance doesn't matter as much as low ESR? Seems lower ESR would be better at the frequency being output.

@jafinch78 Sounds like a plan to me too James, price difference is going to be so little that a lower ESR caps would be the best choice as it minimizes the risk you'll have to put your hands on them again in the future. Despite the presbyopia it seems the eye catch is still pretty good :)

@jafinch78 totally agree with my colleague @arbaman on the capacitor situation. Eventually I should definitely look into getting me some new glasses :-)

@arbaman @oldturkey03 I was thinking might not be a bad idea to desolder and check the main power supply capacitors to see how they're doing regarding ESR. Might be a good idea to just order those and replace also as I've watched where the LED Power Supply board filter cap is bad... the main power supply board might have bad caps also. Thanks for the feedback! Looks like I'm going to be busy tomorrow also... so probably won't get to testing and ordering until Friday. B^)