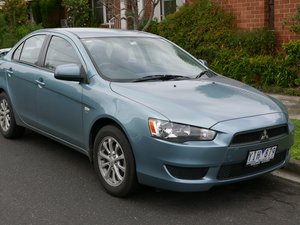 The Lancer is 4 door sedan or 5 door hatchback made by Mitsubishi. The standard model include engine sizes from 1.5-2.4 liters, gasoline or diesel. Transmission options include automatic, standard, and CVT.

I have a knocking/clicking/rattling sound

My car is a 2013 Mitsubishi Outlander sport es Problems with my car So there is the knocking/tapping sound that it comes on only when the car is in motion, details below?

So the sound only comes when the car is moving, it doesnt come on when the car is stop, when I accelerate and put the car in motion that's when the sound comes on and it doesnt go away until the car is stopped, (also when I dont give it gas but the car still in motion the sound still on,) I took it to a mechanic and not sure if he check it because he told me to drop it off and to come back a hour later, but he called me 20 minutes later and he told me that it might be the transmission but he wasn't sure, he told me to take the car to a transmission expert, and j have been asking around and just to check the transmission they are charging me 200+ just for the check up and for the record my car does all the changes good, no delay, or anything like that, so I when underneath my car and I was checking everything and notice that my drive shaft has some play when I move it, the car in in park,

So I went online and found out that my u joints might be bad, or the drive shaft, not sure which one it is, I was also reading that the first sign that the u joints are going out it's when the car comes out of balance, and that happen around 3 months ago that I had to rebalance my tires and change 2 because they were worn out from the inside

I have the same vehicle.

What I would do first is hook it up to an OBD2 scanner and check for codes. Also call a dealership and have your VIN handy, ask what recalls need to be performed on that model. Ask if any have been done on that VIN. Mine had 4 outstanding, one involved the rear handbrake not securing correctly. Recalls need to be fixed by the dealer for free.

After scanning for codes, check to see if any relate to your transaxle or transmission. If no codes, good. But check anyway.

There will always be some play in the prop shaft. Get up close to the u joint and rock it there, see if the caps are loose or there is excessive wear there. if there is replace it, you have nothing to lose by doing that but everything to gain. See if that changes the sound.

It is possible that incorrect wheel alignment that caused your inner edge wear, has also caused your uni joint to wear out.

Hello yes thank you very much for your answer, I forgot to put this in my question yes I did put the machine and no codes for the transmission, I did get a code for the catalytic converter that I need replacement but I know that the sound is not coming from that because if it was the sound will come on even when the is park, and the sound only comes on when the vehicle is in motion, I did a brake job last year and change the brake pads for the front and the back, and I did only change the brake rotors for the back only, so I need to change the rotors for the front because when I go over 60 mph and I try to brake the car shakes a lot,

Thank you for your tips I will be calling the dealer and see if they have any recalls for my car, and i will be checking the u joints for play, because last time that I check I only move the drive shaft a little, I will be putting a update after I do this thank you