tried other options before cracking it open, no luck.

figured a batter would fix, upon breaking it open I find this!!! 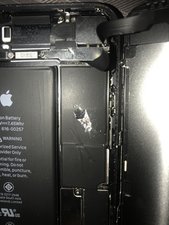 That’s just a scratch, nothing to worry about. Below that black sheathing is a metal shield. It’s there to sink heat from the CPU and conveniently protects the components underneath.

What this does show instead is that someone else was poking around inside the device so it’s hard to say what was and wasn’t done. If the phone won’t turn on, that could be caused by a lot of different things so you may want to start testing and get back to us with more details. The good news is that there doesn’t seem to be any water damage.

I would do the following (in order):

Looks like a possible puncture to the logic board, and exposed the micro-components inside. Replacement logic boards are available thru iFixit, but if you decide to go to an Apple store, it’s not repairable and they’ll have to replace it out of warranty for $400.

I see that’s what I was very afraid of...

I’ve been searching for an image of the black “membrane” cover removed, of course I didn’t take a pic