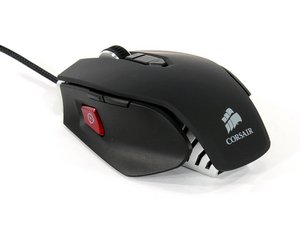 Device repair and troubleshooting for the Corsair Vengeance M65 Mouse.

Can anyone help me with instructions on how to open the Corsair Dark Core Mouse? I am trying to get some magnets under the board inside the mouse to complement a mod I did to the lapboard so the mouse does not fall so easily.

This guide may be of use to you. Hope this helps!

Thanks for trying to help. The Dark Core has to be opened from the top.

Hey Lelio, can you share how to disassemble it?

there are 4 screws to remove in total, 2 with a small torx-type bit for the outer shell, and 2 with a philips to remove the clamshell and access the electronics. aditionally you will also need a spudger, and ideally a heat gun.

First, you need to remove the rearmost PTFE pad on the bottom of the mouse (the one almost directly below the corsair logo). For this I would advise heating it with a heatgun to soften the adhesive and then using a spudger to lift. However if you don’t have access to a heatgun like myself, leaving the mouse on a hot radiator for a few minuted did the trick, although as alwasy be wary.

Then after removing the 2 exposed screws you should be able to pry apart the uppermost layer of the palmrest. note that both will feel loose at this stage, and in some cases the bottom layer may pop first, we only want the top layer with the corsair logo. If you remove the pinky-rest, wou should see a clear divide between the layers, and a spot to insert a spudger to hopefully get started. This stage requires a fairly significant amount of force and dexterity, as it is clipped in via 2 tabs on each side and a centering post at the rear.

removing this, we are then able to flip up the two main buttons on the now exposed hinges. Note that the left one will be relatively easy, but due to the design of the mouse the right one will be signig=ficantly more difficult as it needs a taller post to reach the switch. There have been cases where this right button has broken, so take it slowly.

This exposes the 2 philips head screws which once removed, allow the whole upper clamshell to be removed. again this is tabbed in place, but not as strongly. you now have access to all of the electronics to alter and fix as you desire.

Note that on re-assembly, the right button is a lot easier but I have found the upper clamshell to be a general annoyance. It is very easy to bend and break the tabs, and very hard to do slowly due to things torquing over after gettign 3 of 4 tabs. The best method I have found is to get everything properly lined up on a firm, level surface, and then “chop” down with an open palm to force all the tabs at the same time.