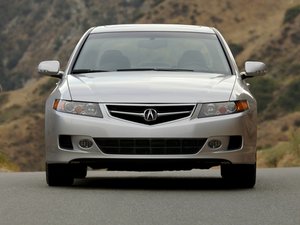 JDM and Euro Honda Accord model CL9 sold in America under the Acura brand.

Clock, radio along with display, and ac and heater panel lights aren't

Clock, radio and it's display, and ac/heater panel lights are not coming on but the actual and heat works

There was a common problem in the 2004 models that a fuse/circuit in the audio control head unit (really, it’s the huge control cluster in the center dashboard) would go bad, and the lights in that section failed. See your Acura dealer about a replacement, and ensure you’re sitting down. The control head costs about $1300 wholesale.

Has your battery been disconnected for a while? As far as the radio and clock, often when they don’t get any electricity they stop working. Its a security feature meant to dissuade car radio thieves. You have to enter a 5-digit code that hopefully is written in the manual , or you can get from any Acura dealership. The radio display would read CODE . the code is entered with one of the knobs. It is entirely numerical so turning the knob will get you digits 0-9. Its a frustrating problem that many people, especially those who bought a used Acura in a private sale have, so even if it doesn’t apply to Terry’s issue, I thought I’d mention it here.