What should I do to fix that pad?

I attempted to replace the Touch IC chip.

After having placed the chip and heated it, I found that it was unsuccessful, so I pulled out the chip and I saw the pad having some dark red instead of solder. See photo below:

What exactly should I do to bring back the grey solder instead of those dark dots?

Is the the black just some oxydation?

I tried to heat it with flux and solder wick but it's not coming off.

Can I remove this with solder wick and put some solder again with my iron?

Also, here is a photo of the chip. Does it look dead or can I reapply some solder on the balls? 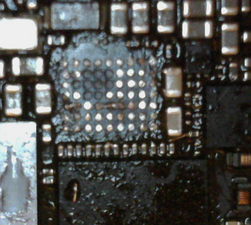 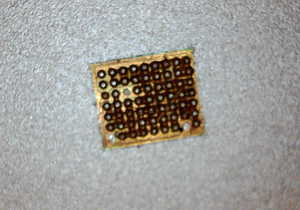 Your pictures aren't very clear but from what I can see, those look like pulled pads. If that is the case, then compare that with the picture below. Any blue pads are NC (not connected) so you can ignore them. Any other pad will require micro-jumpers.

Pulling an IC before all of the solder is molten will pull pads. You have to insure the IC floats on the molten solder. You can do this by gently tapping the IC to see if it springs back. Also, avoid wicking. These pads are simply too small and have very little adhesive and copper holding them in place. The IC will have to be reballed. 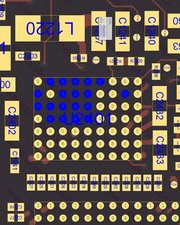