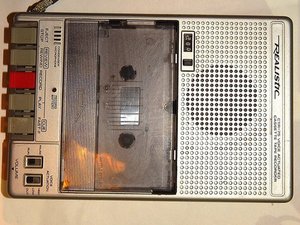 I need help with finding a belt schematic for a Realistic CTR-75 Cassette Voice Recorder. I got it working and I don’t know how to put on the new belts because the old belts were melting goo. Please help. My email is <redacted>

I am going to bet you, one of these will fit.

Thank you very much

Funny enough, I bought one used a few days ago, but it wouldn't play tapes. I just took it apart. The belts were still in place put became slack and would not create enough friction to move the wheels. There are two belts, one under the green circuit board, one to the side. You have to do the bottom one first as it runs on the bottom of the big silver "flywheel". I had to unscrew three black screws to lift the circuit board. 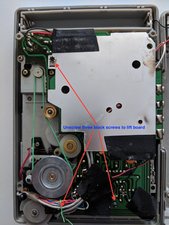 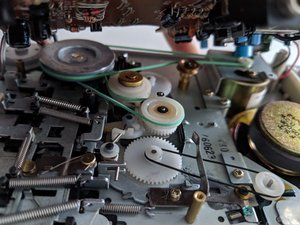 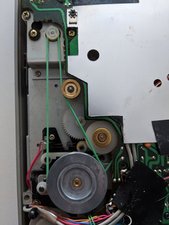 As you can see from my photos, I tried with standard household rubber belts. I think they are to short and a bit to tight. Tapes play, but rather slow. I'll be ordering some belts as suggested by @avanteguarde and see if that helps.

Good luck and let me know how it goes.

Thank you very much