A couple days ago I was surprised to see my Macbook sitting at an odd angle. When I lifted it up, I was dismayed to find the battery pack had burst open. Up til then, the battery (about five years old) was still working reasonably well.

When I took apart the battery, it's clear one of the cells had inflated like a balloon. Anybody know what causes this? Apparently it's pretty common for this machine. Is it inherent in all Li-Ion batteries? This failure mode would be Really Bad in most iPad/Pod/Phone devices, where the battery is wedged between solid aluminum and a glass screen.

At any rate, I've ordered a 3rd party clone battery (about $70). Reviews indicate they're no worse than the "genuine" Apple part, and cost half as much. 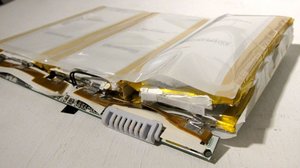 At best a comment. Definitely not an answer. Your video doesn't actually explain anything about the problem or a solution.

that happened to mine too. i always left it charging which someone told me a year later that that may have lead to that.

I'm on my 4th battery in 6 years! The non OEM ones are fine but aren't as well built as the apple ones and the casing tends to crack.

There were recalls on those batteries for a couple of years but have now expired. I've only seen the problem with the 15" & 17" MacBook Pros. You did good to get five years out of a battery anyway.