LCD metal plate is different on my iPhone 5 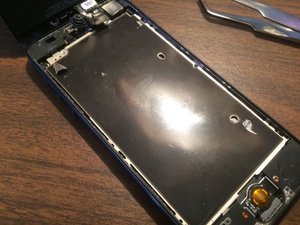 The LCD metal plate is not attached to the display as shown in your instructions. It covers the main board and I don't see any screws to remove it. Can you help me?

Look around the edges and see if you can't find a thin plastic bezel still clipped into the body of the phone. You can use a guitar pick or spudger to get a little separation, which should allow you some purchase to pry the bracket up. Assuming you've removed the two pentalobe screws at the bottom of the phone on either side of the lightning port (you have removed those screws, right?) the bracket should pop up from the bottom much like the display assembly has in the photo you provided.

Nope. Couldn't budge it. The phone was a refurb and I think the previous tech super glued it down. Thanks though.

You managed to pull the LCD off the frame, now the frame is stuck on the case.

Pull it off like you would pull the screen, then find a way to glue the frame back onto the screen.

I could not pull the plate with my suction cup. It might be glued down.