I am trying to fix the SuperAmp for the Turtle Beach PX24, headphone jack to be exact. I have a brown wire, a white wire, green wire and a silver wire in between them all. I am wondering which wire is connected to what. (Left/Right headphone, Ground, etc.) 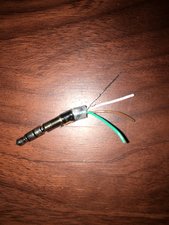 edit: I named the colors where the wires connect. 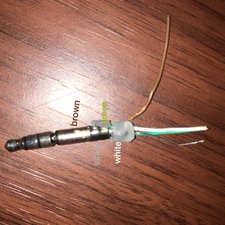 technically that's a picture of a headphone plug. Specifically it looks to be a 1/8 inch/3.5mm TRRS plug (tip-ring-ring-sleeve.

I'd strip a bit of insulation on the insulated wires and test for continuity between the 4 contacts on the plug, and the 4 conductors.

If it follows the established standard, starting with the tip is the left audio channel, first ring is the right audio channel, second ring is a return channel for an independent audio signal, and the sleeve is a common ground/shield.

The uninsulated (Silver) one is probably sleeve/ground/shield

If you have a voltmeter with alligator clamp or grabber leads, you should detect continuity between the uninsulated wire and the sleeve. Strip a bit from one wire clamp it on one lead and touch the other lead to the other three positions on the plug. Hopefully only one of them will show conductivity and then you'll know which contact on the replacement jack to solder that wire to.

The other possibility would involve taking the headset apart and tracking it down from the other end.