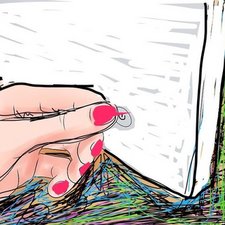 Could corrosion on these connectors cause shutdown during boot-up?

I've been trying to figure out what's wrong with my 2012 13" MacBook Pro. It has proceeded strangely. For a while, I had to use a USB keyboard because it didn't register keystrokes. Then I didn't have to. I probably did few zaps of NRAM and SMC resets along the way, but I don't know what fixed that issue.

I ruled out RAM but not motherboard.

One constant is the following cluster of symptoms: the indicator in the MagSafe plug is always green, but the machine will not run off battery. Disconnecting MagSafe turns it off immediately. Connecting MagSafe causes, almost immediately, the fan to start and booting to begin. It will start to boot off a boot partion on the HD but not make it all the way. Same for internet recovery. I make it through the entire status bar, see the Apple logo alone on the screen, and then the computer shuts down completely.

I have more troubleshooting to do, but before I proceed, I'd like to know something about what I discovered when I removed the battery, intending to try booting without it. There is a connector in the middle of the underside of the trackpad that shows some corrosion. After seeing that, I noticed that a nearby connector was also corroded, and some dried droplets of something on the underside of the battery, looking like it entered at the keyboard-adjacent edge of the trackpad. I was having trouble with wild pointer syndrome just before putting the machine away for a while, come to think of it. I don't recall spilling anything, but it's been a while so that means little.

Would corrosion on either of those connectors keep the computer from booting all the way? I guess I can find out by cleaning them, if I do it well and harmlessly, but I didn't think of that until just now. Also, what does the second connector I mentioned connect? 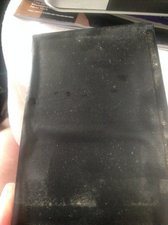 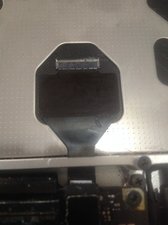 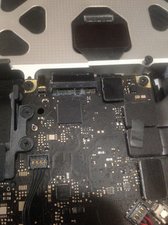 Hello by looking at the pictures you do have corrosion on your keyboard cable and trackpad i suggest disconnect everything and pull the board out to see underneath the board could be serious board level work if is fully corroded take some pictures while you at it make sure to use the ifixit guides. If you see white corrosion you have to clean it with 99% ISOPropyl and use a antistatic brush.

The keyboard flex is attach to the power button as well that could cause to power on automatic cause of the corrosion.

@elcrashitan corrosion anywhere can cause your system to shut down. You do want to start by removing your board and to clean it properly with either 90%+ isopropyl alcohol and a soft brush, or better yet have it cleaned via ultrasonic cleaner by a professional. For as long as you have the corrosion you also do not want to continue to turn it on etc. since eventually you could shorten out other components. Clean it, assemble it and then troubleshoot. Right now everything will only be a guess. The corroded connector is your keyboard connector which incidentally also turns your MBP on.