Why do my internal keyboard and track pad both become unresponsive?

This is the details on my system:

Maybe last night, I spilled my system but it's only very little spilled water like one or two drops water and I wiped it as fast as I could.

Everything was fine and suddenly my trackpad and keyboard are unresponsive. And There's like some pop up message tells me that its searching for bluetooth keyboard & trackpad.

Both of my internal keyboard and trackpad become unresponsive, including my power button. So now I can't log in or even do anything.

So stressfull about this. Could you give me some advice?

Today I tried to connect the charger cable and MagSafe LED indicator shows orange and it's charging. Does that indicate that my battery is not the problem?

What happen to my Mac and What should i do? Thank You. 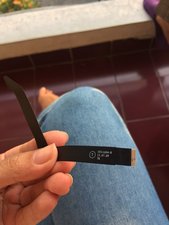 So after 6 days, I just got my MacBook back to live again!

So here's the answer.

I bring my MacBook to service center in Indonesia, they checked it and then turn out that my Flex Cable 593-1604-B burnt. That's why my MacBook can't turn on normally. Then he checked the water damage, but there's no corrosion in my MacBook and Logic Board seems good. So they change the cable, it only cost around 45$, seems the cost better than to change the logic board i think.

Thank You all for the respons.

What could have happened was the keyboard cable got disconnected or cut. A similar thing happened to my MacBook Pro. What you can do is unscrew the bottom plate, and when the computer is plugged in, create a short between these two pads. 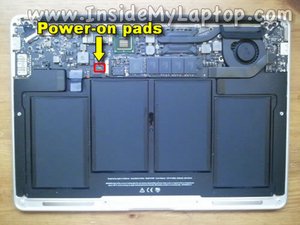 This will basically be the same as pushing the power button. If you want to repair the keyboard and trackpad, unplug the battery and power adapter. The battery connecter is located on the far left beneath the power pads. Check the other cables next to the battery connector for breaks or if they're disconnected. 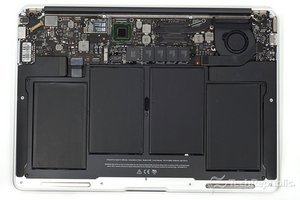 and if they are fine that must mean that the cable has been broken further along the line. To find the break you have to remove the logic board. Just Google 'how to remove logic board on macbook air 13'. Hope that fixed your problem.

Be careful here! There are a few different MacBook Air's as such the Power Pads are not all at the same location.

Until we get the OP's exact model its a bit of a gamble to point to locations on the logic board to poke as it could cause damage.

But you do have the right idea on how to diagnose things.

Hi, thank you for the respons.

Please check it out. I just give some details about my MacBook.