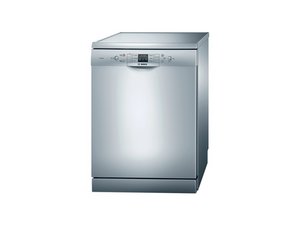 Dishwasher by Bosch identifiable by the model number SHU5315UC-06.

Water keeps coming back after draining, raised the drain hose turn off

Bailed the water out but it keeps filling the bottom of th e dishwasher and leaking out on the hardwood floor. I raised the drain hose and even turned off the water, and water still came back. What gives. This could take an hour or more, but it's a pain. Some times it doesn't do it. Not sure why it's sporadic.

If your dishwasher will drain when you cancel the cycle. The problem is most likely a faulty water inlet valve. If you look you will notice the water is clear and over time the level is rising, it is because the water inlet valve is not seating entirely and letting a little water trickle in. Google replacing water inlet valve, it's easy and the part is cheap.

Your washer is siphoning,

If your dishwasher will drain when you cancel the cycle. The problem is most likely a faulty water inlet valve. If you look you will notice the water is clear and over time the level is rising, it is because the water inlet valve is not seating entirely and letting a little water trickle in. Google replacing water inlet valve, it's easy and the part is cheap.

Hi Kevin, I actually had this issue about a week ago and cannot fix it (plumber was here and just snaked the kitchen and said it was fine, but it takes over an hour for water to show up again at the bottom of the Kenmore Elite Dishwasher from 2004).

I read your answer and understand everything u mean... ""you will notice the water is clear and over time the level is rising, it is because the water inlet valve is not seating entirely and letting a little water trickle in"" ...except one important thing which I can't figure out at all.

I turned the water completed off to the dishwasher. There is a dishwasher drain hose directly connected to the larger sink drain pipe as well.

Please let us know. Thanks!

I have the same problem, any suggestion? Thanks.

If you shut the water off, there may be enough in the connection hose to put some back in but that wouldn’t be much I wouldn’t think. That is pretty weird. Are you certain the water is completely shut off?

Thanks for the reply. In my case, it turns out that the valve was defective at the same time. Water still leak into the dishwasher after I shut off the valve. Problem solved by replacing the water supply valve.

I had a similar problem with my Bosch. Turned out to be the float switch.

Check out this video on how to do it yourself.

I just bought a house , newly refinished kitchen, the garbage disposal sounded like it worked so I put food down it- nope all the food didn’t let the water drain, used the tool, didn’t work, no reset button worked, but sounds like electric- all new appliances- ran dishwasher empty- all the water onto my floor from under neath - I’m literally crying as I’ve spent my money and already got ripped off by a friend and had to pay to fix what he left me with- now this isn’t enough- I have hot water at the bathroom sink but no hot water at the bathroom shower- so after days of moving , packing, cleaning crappy water and no sleep- I can’t take a nice hot shower - all looks and no mthing is working and I’m so unhappy- single disabled mom- no income!!! Help

Paid electrician to do 800$ work already, paid 3000 to a friend from high school that loves me to knock down a wall and paint three rooms, he posted a beam painted one room and extended my move twice rajing 16 days and left his crap and didn’t paint even the day before my move, cancelled the move, gave him another week, didn’t even sow up, he said he paid the electricians 1300 of my budget cuz day 1 he was not on his job site here, they did wrong and he had to pay them again with my money 600 to come back to move two plug, I paid his mistake 1200 for moving two plugs , lost my front light and he never came back because he wasn’t making money on the job, I had to pay 1400 for some to finish - he said he thought the money was to see how far we could go with it and I didn’t bed to extend my closet as planned as it would cost money and by not doing it I save money and it’s a win win for all - really ! We agreed on everything and enough until he was present to direct the electricians, shaking hands and cash isn’t enough- he’s keeping the receipts so I can’t use in my taxes even tho I asked three times-you can’t trust anyone these days!!! Not even your daughters godmothers husband - what a bum- ruined the electric inmy house and now I have to pay someone to fix my front light that has nothing to do with my bedroom but he said he had to cut power to it for the day and never put it back on, when asked, told me to change the light bulb, I had to send him the text- really- I’m a new Home owner , had to pay 1400$ for some to finish so we could move in 20 days later after he said 4. I lost all hope in friends - this is costing me so much and now half ass plumbing in a brand new refinished kitchen!!! No money left , no hot water in the shower, but in the sink- no dishwasher , backup water, garbage disposal sounds like it works but doesn’t and the tubes are not right underneath gravity wise it’s a circus under there and the plumbers half assed the whole job- people have no work ethic!!!