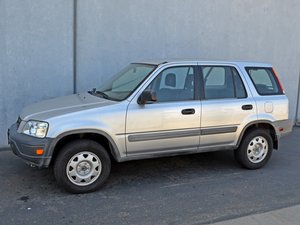 I have an RD1, and aftyer 6 years i still love it.

I have recently had some unusual things happening on my aftermarket stereo, such as jumping stations, switching between bluetooth + USB, and turning off and on. Very wierd. We had the stereo replaced. New one does the same thing.

I SUSPECT the HT system is putting noise or transiesnts onto the 12V line.

I went ahead and but a ferrite core around the Stereo wires, then put 2 capacitors on the stereo Power and another one on the stereo accessory line, hoping to absorb transients.

When i went to start the car, the 12V from the cap stayed on while the engine was turning over, and I blew the radio fuse under the hood.

All other fuses are OK.

The local wrecker here has CRV parts CHEAP, so I'm planning on replacing the main computer and distributor set (With ignition module inside) tomorrow.

Do you guys think I'm on the right tracK?

New computer and Distributor module will set me back anout $100, so not going to break the bank.

Very keen to hear your thoughts.