I have zero knowledge of electronics, but I know for a fact that I popped a certain part of my new iron's circuitboard when I accidentally plugged it into a 220v when I should've bought a 100V transformer.

That said, I'd like to ask if anyone knows what part the attached image has, so I can get an idea of how to go about repairing it.

I've gone through the whole thing, and the only notably-dirtied part of the iron is on one circuit board.

As far as I know, all I'd need to do is to clip it out, and solder in a new part, though any advice on how to go about it would be nice. 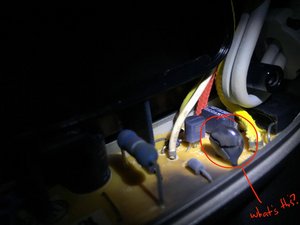 The encircled part seems to have exploded. I've managed to use the iron prior to taking it apart (after I've bought the 100V transformer), and while the ironing function works, the button (which is connected to the broken part) for enabling the steam-spraying function fails to activate, as well as the LED by the handle.

I'm willing to provide more images and info for anyone who'd be willing to help. I really wanna get this running again.

Hey zakk, thanks for replying! I'll try to answer as best as I can, since I got a bit lost with some of your jargon. (:

the area around the cracked/popped part had two letter-combinations near it, and I'm sure one of which belongs to it (the other belonging to the other wire). 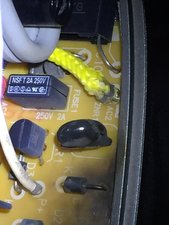 in case the picture doesn't make it clear, the set of letters are AC2 and ZNR1. I don't know how that translates to you guys, but I hope that helps.

I'm afraid I don't own a multimeter, but here are pictures of the whole iron, and what portions of the affected section of the circuitboard I could get. I didn't want to remove everything from the body since I didn't want to compound the problem any further, and from what I know only the circuit from the handle is fried. 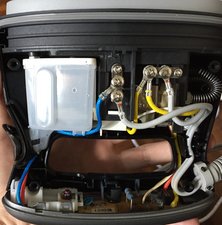 also thanks jayeff for the response! the faulty part just cracked, that's it (as far as I know). Googling the letters seems to give me Panasonic-brand "Transient/Surge Absorbers", so I guess that sheds some light here?

any word on the repair? I literally JUST did the exact same thing. I've used my steamer before (with a 110-250v converter) but for some reason, it popped on me tonight. This is still in very good condition and I dont want to toss it. I will try to follow what you did and fix it if possible.

Hey mate, don't feel too bad, we all make mistakes. I'm almost positive, that whats gone pop is a metal oxide varistor/voltage dependent resistor....or just varistor (confusing I know). On the board next to it, it should say something like VDR1/ MOV1/ RV1.

What they do is, when an over voltage is applied, they shunt the voltage to the mains neutral or earth. This protects the rest of the circuit. I'll see if i can find a replacement for it.

The 2A fuse thats to the upper left looks like its cracked open as well.

Do you own a multimeter? And could you post a photo of the entire circuit board, by any chance? I ask, so I can tell you if theres anything you need to test on the board, to make sure nothing else has died. But also so i can explain how to do so.

Check to see if there is anything printed and still able to be read on the faulty part itself. Try to be careful when rubbing off the dust to see better, you may rub off the information. This is usually the part type/value information. If still there just Google the information only (do not add what type of component you think it may be) and see if you get results. (if no results then add the part type info that you think it might be (see zakk's answer) + the other info and see what you get then.

Hey Seven, thats quite alright. Sorry about the jargon, that was my bad. AC2 will be in reference to the yellow wire (its carries an AC mains voltage). ZNR1 is the part thats blown. Transient/Surge Absorber tells me its a MOV. What this dose is, it stops the rest of the circuit from being blown when it cops a transient spike (a voltage higher then what the equipment is rated for. In this case 220v when its a 100v device).

The part thats a black square is a fuse. From the photos it looks like its blown as well (perfectly normal when this kind of accident happens). Its a 2amp at 250v rated one and will only cost a few cents.

Is there any chance you can post what was written on the blown MOV? It'll make finding a replacement easier.

From what I can see, the rest of the circuit should be ok.

Thanks zakk. Here's a close-up of the blown MOV. The code indicates V7241U, a reversed R and U, and the number 65.

I'm unsure what black square you're referring to, but I believe it's this one? Has the code NSFT 2A 250V printed on it.

Ok so the V7241U is its part name. The other bits are manufacturers info etc. Looking in the data sheet, the part number (the names can get confusing haha) is ERZV07D241. Im not too sure where in the world you are, but this is a UK supplier and will give you an indication of how much it'll cost http://uk.farnell.com/panasonic-electron...

And thats the part I was referring to. Its a fuse. I can't find that exact one, but this is a replacement one for it http://uk.farnell.com/multicomp/mst-2a-2...

If you are going to fix the board, my advice from experience is to order 1-2 more then needed in the off chance something else is wrong and pops them again.

farnell is now called element14 they are good to deal with. Here are the same parts from the Aust. website. If it is not in stock in Aust they will ship from the UK or wherever at no extra cost (or they used to as of last year anyway.).