Can I replace the “irreplaceable” LEDs on this Philips lamp?

I just bought the Philips my Living Spot light: Balla matt chrome LED. I replaced most of my home's lamps with LEDs. This Philips one seems like a good replacement for the light in the dining room.

However, when unboxing the spot light, I noticed that I cannot replace the LEDs.

Is there still a way, though? I do get 5 years of warranty, but—obviously—it would be nice to be able to replace the LEDs when they don't work after that period.

The only information I can find of the LEDs (see PDF document) is that each one uses 4 Watts, the total lumen output is 990 lm and it is an equivalent to a traditional bulb of 29 Watt (but it is unclear if that means for each LED bulb or for all three). 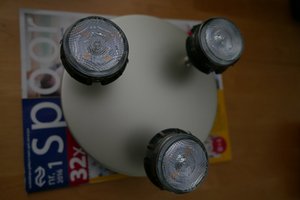 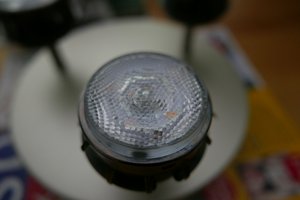 LEDs currently used in lighting fixtures have rated lifetimes of 30,000 to more than 50,000 hours. It is therefore extremely unlikely that such a LED will fail during the lifetime of the fixture, which is why they are not user-replaceable. To put this in perspective, the inverter that powers the LEDs is much more likely to fail than the LEDs themselves.

That said, in the unlikely event a LED should fail, you could probably still replace it yourself, given a bit of patience and a solder iron.

To answer your question about light output and the equivalent traditional bulb, this fixture is rated at 990 lumens total for a power consumption of 12W, which is pretty decent at 82 lm/W. Traditional incandescent bulbs have an efficiency of about 12 lm/W, so the traditional equivalent would indeed be somewhere near 3 lightbulbs of 29W each, give or take a Watt.

I actually got three leds failing in the first week, which means that they failed before the inverter. This seems like a failed design to me (and also, that the one I got was probably a bad one too).

The typical failure mode on these as the array is normally a 3*8 or similar array and one or more diodes goes high resistance due to overheating or just plain bad design.

The series drive chip detects this and shuts down, however sometimes the capacitor goes bad as well.

Depending how vigilant your lamp manufacturer was this should just shut down or blow a fuse, but sometimes the circuit goes into runaway and blows all the diodes.

I have also seen a similar failure in LED TVs, if you have a dim third of the picture then this is quite likely.

Often changing the bad diode (darker than the rest) then testing will bring it back to life.

With S**s**g LED TVs the board housing the bad LED can be replaced individually if you can find a scrap panel with good backlight unit(s).

LEDs can vary between 3 and 9V Vf which can be determined by voltage testing with a 9V battery and 330 ohm resistor in series, and a voltmeter across diode under test, also handy for colour matching.

Obviously if you're going to repair these the good old hob-reflow-at-75%-heat technique works well but YMMV, if metal core PCB this works brilliantly (no pun!)

Best to use brand new emitters and lots of no clean flux when changing these as you normally get away with one reflow per diode.

If you can't get new emitters its probably worth buying a cheap bulb and harvesting unused ones at a pinch.

Flying Dutchman is right, and maybe I'd be more optimistic...

It's not easy to see from the pictures, but these "irreplaceable" led bulbs look a bit like standard GX53 bulbs, that can be bought from Aliexpress or ebay for less than 5$ each (I use such lamps for 2 years now, and at 5w, they're very efficient) .

Of course, I wont try to teardown these lamps to verify *before* they fail ;-)

Also useful: if you are unlucky and have the LEDs with internal diodes you can add this part externally.

Got my Tosh 32” working this way, saved me mucho £$$ as the diodes are literally impossible to get new.

There are folks on the bay selling miniature IR rework stations that look like a black glass square, not tested but basically the same idea.