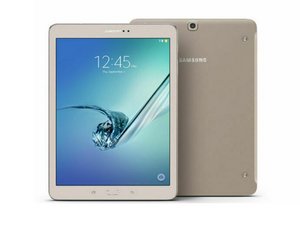 This is a touchscreen tablet manufactured by Samsung that was released in September 2015.

How do I change the battery?

I have a problem with the battery in my Samsung Galaxy Tab S2 8" and already got a replacement battery, but I'm struggling with opening the devise. I've changed batteries in different models but this one seems really tricky. Can anyone advise how best to do it?

Alright, I see the video posted was for a Tab 2, not a 2S which is really quite different. So I'll try to explain this as best as I can

The screen is held in place with some pretty strong adhesive so I found just pulling off the screen with a suction cup alone would not do it. I recommend having a friend help because believe me, it's hard to pull off.

What I did was use the iFixit iOpener tool, heated it up and placed it on two edges of the device that meet at a corner, I did this about 3-4 times (If you're in a pinch a heated cloth bag of rice would also work it just might take longer). After each try I used a suction cup to try to loosen the screen. Also what helps is if you use a spudger or some sort of spacing utensil to put a little space between the metal edge and the screen (I had to make space with a little force because I know the screen is almost perfectly sized so there is little free space). I had a friend help me and hold down the device while I pulled on the screen.

There is a ribbon cable connected on the top of the device so you need to be careful not to damage anything by ripping it out, so you'll only want to lift up the screen 3-4 inches on the end you pried it up, and then go around and loosen the rest of the edges before disconnecting the cable.

Once you do that you'll have to remove 19 screws (2 black 17 silver) to separate the batter compartment from the rest of the device.

Then you will remove 4 screws that hold the battery in place.

Then in one of the corners there will be a ribbon cable, you need to remove one side so you can slip the battery out, I found the one that is parallel to the longer side of the device easier.

Finally, you just need to detach the ribbon cable that connects the battery to the device, it should be directly in the middle on one of the sides that run parallel to the longer side of the device.

Now you can just remove the battery and replace it!

Just reply to this for any clarification that is needed.

Must heat the tape under the screen before attempting to open. This will break your screen if you dont. Can heat with (as they do it, heated bean bags in microwave) a hair dryer! Around the edge of the screen is small things stripes of like double sided scotch tape... very sticky. You can visit your local electronics repair center or MAYBE radio shack and beg for a new piece. (For the origional type of tape) If not, just buy double sided scotch tape. Cut to fit. You will have to totally clean off the old be forever putting on the new. (Rubbing alcohol ) soon as you have the screen unglued ( package of guitar picks or a thin gamestop membership card will do the trick.. slide under and along edges, not pry)When unstuck, do not lift it up without looking under it to figure out which side to fold back the glass screen to remove the ribbons connecting the screen to motherboard (this might be different in this S2!) That's all I can advise. Maybe unplug battery before screen swap.

Pry the two plastic tabs off the bottom of the device with a metal spudger. Remove the screws underneath with a tri-wing screwdriver.

Insert a plastic opening tool in-between the screen and the back casing near the bottom left of the device. Slowly pry the face away from the casing, inserting guitar picks as you go to keep the two components separated.

Related Reading: How to Sync a Galaxy S4 Calendar With a Galaxy Tab 2 10.1

Insert the opening tool through the dock connecter and stick it between the front panel assembly and back casing. Pull the casing up and stick a guitar pick in as a spacer.

Work your way around the case, separating the front from the back as you go. Use extra caution when you reach the top left corner of the device, as the microphone ribbon cable runs through this area and is very easy to tear.

Lift the left side of the panel slightly out, and then use the plastic separator tool to pry the bottom and top-right corners out of their clips.

Life the front panel away from the rear casing to expose its insides.

Remove the screw from the top of the battery with a Phillips screwdriver. Pry the battery out of its connector with the plastic separator tool.

Insert a fresh battery and re-assemble the device.

Is this for the Tab S2? I don't see any plastic tabs at the bottom of the device. It is surrounded all round the sides (top +bottom) by a continuous metallic strip/frame.