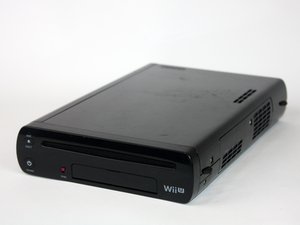 My Nintendo Wii U would not eject the game disc that was inside of it (Super Smash Bros. for Wii U). When I pressed the eject button, the disc drive would make a noise as if the disc was going to come out but the disc remained in the drive and would not come out.I opened up the Wii U and took the disc out of the disc drive.

The Wii U still thinks a disc is loaded in the console. The menu says there is an invalid disc in the drive when there is no disc at all. Pressing the eject button makes the same noise as if a disc is trying to come out and then the laser moves, trying to read a disc that isn't there.

Is there a position I can manually move any of the disc drive parts in or to so the console knows there is not a disc in the drive? Should I just replace the drive?

Th link should help you in the problem you are having.

Get yourself very thin tweezers. I have a pair that is flat metal bent in half to form tweezers, not the scissor type. Put a little electrical tape on the ends so you don't scratch your disc while pulling the disc out. Gently put the tweezers between the padding the disc slides in and out trough, push eject and a little panel behind the padding should slide out of the way, quickly get the tweezers past the panel so it doesn't shut on you. Grab the disc and pull on it, it may take a minute or a few tries. Our disc came out about a quarter of an inch the first try and then eject the rest of the way on its own. The disc had a sticky substance around the hole in the middle as if there was a sticker from the manufacture/previous owner (ours was used), maybe your disc has the same thing. Clean that off and you should be good to go. All our discs are ejecting perfectly so I am 99.99% positive it was the sticky substance.

Why this posted here I don't know. It was suppose to post for the question about disc not ejecting but wii u trying to eject it.

This would be a good way to do it if the panel moved. My panel is staying there?! Is that a hardware problem? HELP

Probably means your disk drive is jammed. I'd just either replace it or see if there's another disk inside. Either way you do have to take off the tops of the Wii U