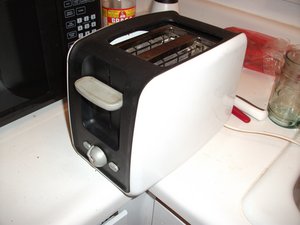 It is a toaster

Nothing is bent and the crumb tray is clean. So why won't the toast lever say down? Is it done with magnets (as our other toaster will only work when plugged in for the lever to stay down). Could the magnets stop working if that is indeed what keeps the lever down? I hate to ditch this toaster and if I could get it to work, I'd return the one I just bought.