Spark on MacBook Pro logic board

Today I was cleaning the fan of my macbook pro beacuse it had a big ball of fluff wich prevent it from working. So I opened it but I didn´t unplugged the battery, and to make matters worse I tried to disconect the fan´s cable with a metal screwdriver (i know). While I was doing this i touched something (i dont know about circuits and stuff, so I don´t know exactly what it is, but it´s marked in the pic with red) and a spark came out. When I saw this I felt like if a little piece of me died inside me (how dramatic) :(

So I assembled everything back and well, it didn´t turn on. I did a little research and found a some similar cases out there, but instead of having the spark where i had it, they had it while unplugging the battery cable. Some of this people fixed it doing this:

Well, not my case. Some people said that you needed an 85W Magsafe for this to work, so I wonder if it didn´t work for me because mine is 60W. Also, after opening the mac again I noticed that the component marked with blue started heating a lot, so I unplugged the battery. Do you know what does that component does? Do you think there is a way to fix/bypass the logic board or do you think I shorted the board and now I have to buy another one (oh no, my wallet)?

This are the specs of my mac, hope you can help me. And sorry for the long post! 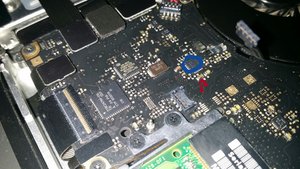 Oh, im really sorry about the pictures, here is one I have in my dropbox https://www.dropbox.com/s/qvurdy9ilamfzz...

It's difficult to do this kinds of posts whithout my computer :'(

OK, you've fried the logic board. Now it's time to use some common sense. Keep your mouth shut. Call Apple up and tell them you want a "flat rate repair". Pay the $350, have them ship you a FedEx box and you will have a working machine with all the problems repaired in 4 days. Do not tell them how stupid you were or what you did. Just tell them it's not working and you didn't spill anything into it. Just get a working machine back for half of what it will cost you to repair it any other way.

C7373 and C7372 are too close together for you to know which you actually touched with the screwdriver. Before you buy chips, you should have a schematic and a boardview, which will allow you to answer these following, elementary questions(and no I don't provide this, but google does)

Measure for PP5V_S5 and PPBUS_G3H. You should have 5v, and 12.6v respectively. You shorted one or the other, before you go ordering $@$* make sure you order what you need.

If you buy a TPS51125 and what you sparked was PPBUS_G3H, that is a waste of time. The parts you circled are too close for you to have a reasonable idea of what you actually touched without actually measuring. One is a supply capacitor to TPS51125 for its input 12.6v(PPBUS_3H), the other is a supply capacitor for PP5V_S5 which is created by an LDO inside the TPS51125 and used as a reference for creating PP5V_S3.

Also your board is not 820-2565, that is the number for the charging port which is the same for every machine from 2009-2014. Give number of actual motherboard so you can find proper schematic & boardview.

Good chance that he shorted both capacitors.

Since Edgar mentoined that the TPS51125 is getting hot, my bet would be the TPS is gone.

But some extra measuring can confirm this

Thanks everyone for replying! Funny thing you replied Louis, cause when this happened I searched for tps51125 and the first video that came out was one of yours. Wish I lived in the States so I could send you my mac, but i live in Mexico :(

I literally took my laptop to every lapatop rapairing center in my city but no one knows sh** about logic boards. Recently I found out that a cousin of mine who repairs cellphones has the tools to this job, so Im gonna give the laptop to him tomorrow, and Im gonna tell him to do what you just said, Louis. I already bought a tps51125 haha so lets see what happens.

I just fixed a phone from Mexico yesterday. The world can be a lot smaller than you think.

Take out the logicboard

and youre ready to go again

This is probably a very straightforward board repair--that is a common chip to fail on MacBook motherboards. I'm not sure that replacing it is a DIY job unless you are able to microsolderer--the first one I did was tough. But it is doable. You should be able to find an experienced mail in board repair shop online for about half of what Apple would charge for their flat fee replacement.