My iPhone 5s was experiencing some issues with the touch sensitivity and the screen was apparently broken.

I took it to some small repair shop where the owner told me all he had to do was replace the screen and that would fix my problem.

Within 20 minutes he replaced the bottom touch screen and the top glass screen, along with the button.

However after replacing the screen several things changed:

The first is that the screen now appears to be sticking out a little more, (nothing major, just and observance).

Second, the home button no longer clicks upon pressing, it feels a little stiff.

Lastly, and most importantly, the phone is stuck on the apple logo that appears when the phone boots. It remains like that for several minutes until the screen turns entirely blue, and restarts. Then the loops starts again.

I've read everything from it being possibly faulty conductors, to battery replacement, to firmware fuckups.

Does anyone know what it could be?

The dude said to leave it charging for a half hour since the screen and the motherboard were "detecting the software".

It's been an hour and nothing...

I took the phone back and told homeboy that it was working before I took it to him and that it was he who messed it up. I paid him to "repair" my phone, not finish messing it up. He put the old screen back on it and it was back in the condition that I took it to him in. Except for one big thing... All my &&^&^$ data was deleted. Now the phone is back in the condition I took it to him in, minus all my data, and he returned my money. He says its a motherboard issue, and to "take it to apple". Quite mediocre the shop, I'm never going back. So yeah, I guess I'm &&^&@@ since the phone was bought used (at his shop, over the summer, might I add).

Well, to repair your iPhone making iOS return to normal, you can try using the iOS System Recovery.

iOS System Recovery can one click to fix your iPhone iPad stuck in Apple logo and recovery mode without losing data. You can read more from: https://www.youtube.com/watch?v=xFY_D8kd...

There is several possibilities to this:

A/ He's damaged the main board in his process of repair

C/ Some how he's managed to corrupt the iOS

The issue of the home button could be because he's put the metal plate behind the home button back the other way round and therefor not pushing on the bit that sticks up on the plate.

My suggestion would be to go back to the repairer and get him/her to fix it, or seek some sort of compensation.

**Just went back to re-read your post again a couple times, did he put a new home button in your phone? I've seen cases where new TouchID home buttons don't work together with the main board, and will go on an endless loop of restart and blue screen.

And it says connect to iTunes

My screen was also not replaced 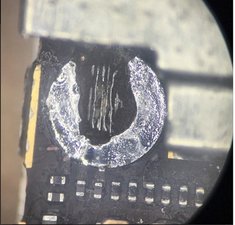 This is the classic presentation of iPhone 5s blue screen of death due to long screw damage.

This is well described in the repair community, and it is due to a botched screen replacement as you suspect. What happens is when someone accidentally mixes up the screws that go into the LCD shield that covers the flex connectors.

One of the screw brackets is very short. Under that bracket are 7 key traces--electrical conduits--buried in the board itself. If you accidentally tighten a longer screw into that bracket----it will press down into the board and tear the traces.

This causes boot looping and the blue screen you describe.

Your case sounds classic for long screw BSOD--blue screen of death in the iPhone 5s. It is an extremely tedious repair--the 7 traces must be patched and each is the size of a human hair. But it is doable. There are few other shops in the US that can do it in addition to me. If you want a repair quote, find me via my profile.

PS: Your phone's data can almost always be saved---the phone usually comes right back on after trace repair.

Where do I locate this area the picture you are referring too ? On the mother board?

If the screws that hold the metal shield above the screen connectors are in the wrong holes then this will cause a blue screen.I would suggest bringing it back or to someone else. if you feel confident open it yourself following the guides on ifixit. More info on this issue in the below link

If the shield screws are in the wrong place this iPhone is done. Just the poor quality of the the returned iPhone makes me believe many bad things have happened during the repair of this iPhone. Screen not in proper position, home button not set correctly to click. Even worse blue screen and non booting iPhone. So many bad issues now, ouch.

Nah--it can all be fixed. It's still a 5s which is still recent.

I've seen this happen when proximity sensors wasn't plugged in all the way or got shorted out. He may of replaced sensor and sensor shorted out. Try a reboot and f that doesn't work then have him look into connections

Okay, so first bet is proximity sensor. What do you mean by "reboot"? I've held the power and home button down a few times, just results in the blue screen, then apple logo.

It worked before I took it to you why does it not work now and do you have a replacement or do I have to raise !&&*

If you turn the phone on without the screen plugged in and then finish putting the phone back together then it should come on. At least it did for me.

This happened to mine. So I just took those screws out and put them back in the correct spots and it worked flawlessly i got really friggen lucky!!!! worth a try!

its the screws on the big sqaureish plate you have to take off to change the screen..