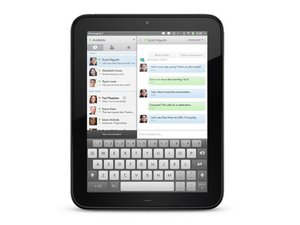 A tablet developed by HP in 2011 running the webOS platform. Boasts a 9.7" display, and is available in 16 or 32 GB. Repair is straightforward, but requires time and persistence.

Where can I find a Hard Drive for my TouchPad?

I have a TouchPad with a bad hard drive. is there anywhere I can purchase one to install myself?

it does not use a hard drive, it uses solid state memory and is not replaceable unless you know how to surface mount for ICs with pins underneath (very rare skill). Do you still have warranty? it should be covered.

Oh whoops. No I don't think I have a warranty because I bought it used. and the guy I got t from said it had a bad hard drive and that's why it wouldn't power on (and why I assumed it had one).

It may not have bad memory, just simply corrupted. No guarantees here but it's worth trying to run WebOS doctor on it. If it fails at 12%, then it's likely corrupted from a failed Android install. There are steps in the webosnations.com forums and rootzwiki on steps to fix the issue either using tpdebrick or running command line to rebuild the partition structure. It actually takes a lot to truly kill a TP so if you have not already tried the above it's worth a shot.

If it's not been charged for a while and does not come up with the included barrel charger, connect it to one from a cell phone for a day or two and it will slow charge it enough for the TP charger to finish the job. There is a known issue with the charging circuit and once the battery level gets too low, this is the way to get around it.