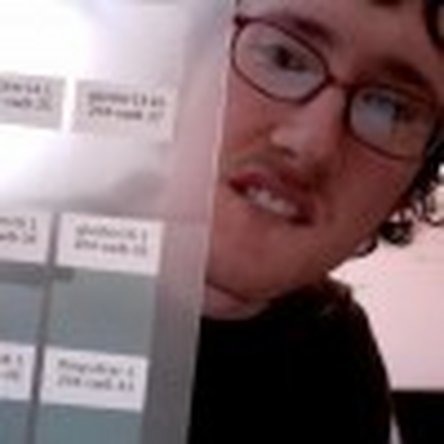 "Temperature" screen even when the phone isn't hot?

After changing my battery, the battery works fine again, but a few days after I changed it, I started having "overheating" problems. These are not actual overheating problems, because the phone isn't hot, but it keeps showing me the "Temperature" warning and telling me I can't use the phone until it cools down.

This has happened fairly constantly at seemingly random times, and thus far, the phone has never been hot to the touch. It even happens while the phone is physically cold to the touch (outside in 20 degree F weather, for example).

Today I can barely use the phone, it just says "Temperature" pretty much all the time. For a few seconds, sometimes it goes back to the normal swipe-to-enter screen, but it goes right back to the Temperature warning screen after that.

Everything else on the phone works, so I'm sure the repair went smoothly otherwise. Again, this took a few days to start showing up.

Here are the relevant facts, along with some things I've tried to troubleshoot and such:

I'm running the latest firmware (6.0.1) and it's not jailbroken.

I have the same problem except itss not with the battery. It fell out of my pocket when i was driving a fourwheeler and the screen shattered and the back is pretty bad. it functioned for several weeks but recently it started giving me the temp. thing all the time. its an ipod tho

I have the same problem, I changed the battery once. but after one day the problems back again . could you help me that how i can fix it ?

lorenjanwilson, this can happen with a wrong or bad battery. Change the battery again, either with your old one or another new one. I know that people say they are all compatible, but I've had some weird errors with those batteries. Hope this helps, good luck.

Oh... well you were half right. I swapped out the battery with a second one, which caused the issue to go away for about 36 hours. And now the issue is back again.

what is the part number on your battery?

I'm going to open the phone and clean all the contacts with isopropyl alcohol when I get home from work today, I'll keep you all posted.

Cleaned the battery contacts and made sure everything was clean. It all looks very clean inside. Problem is still happening though. Strange.

my new iphone 6 after 1 month since buying has a same problem . after i changed the battery it solved but after 20 hours later back to the problem again .i know many people who buy iphone 6 and 6 plus that had a same problems.

Hi,I have a temporary solution for this.

Try covering battery points (only middle two points) with small square pieces of electrical tape on motherboard. It will stop the temperature sensor. The phone will work fine but keeps restarting after intense use.

I also have the same problem with my 3gs did everything but I think it's the last solution.

Hi mine done the same, which was a real pain, but it was also after fitting a replacement battery from ebay, so i ordered another one, which i fitted to my phone and all was fine, no temperature error, so looks like you need another battery to fix the problem, simple!!!!

Well it could be that the battery is damaged

hey i have the same problem my phone keep alerting me of the temperature every 5 min and i have to shut it down to be able to use any idea how to fix it?